Kyle Roderick, Forbes, March 6, 2019
Open a larger version of the following image in a popup: 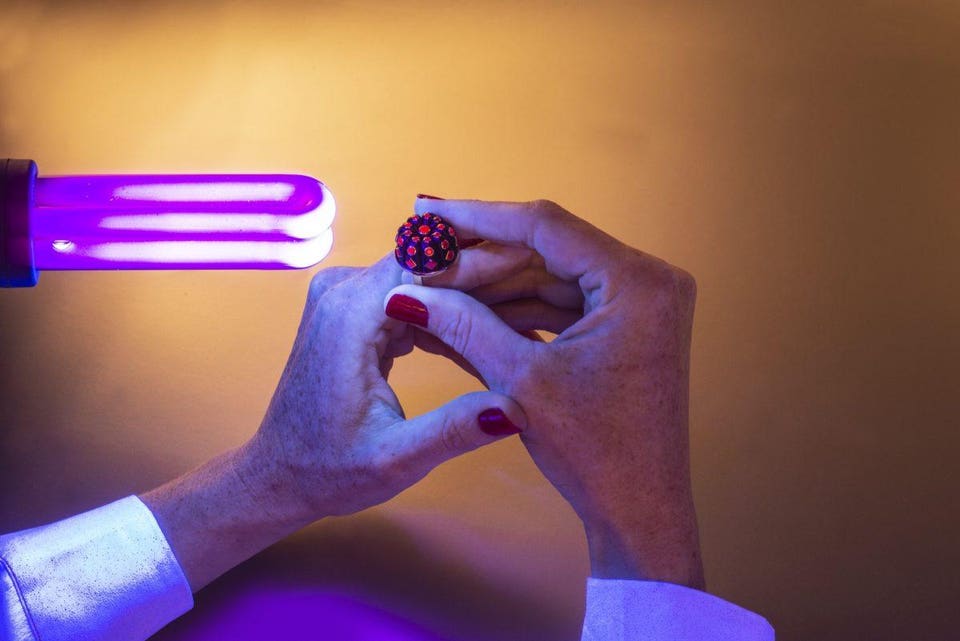 “We look forward to inviting our clients to the Louisa Guinness Gallery to explore our version of Aladdin’s cave, which is aglow with Cora Sheibani’s fluorescent jewelry designs, gems and minerals,” Guinness says. Gemstones are imbued with rich colors and natural beauty, but when they fluoresce, Sheibani explains, “The light they emit is hypnotically beautiful. I have long been fascinated by fluorescence, especially in diamonds,” she continues. “These will glow under UV lights, usually in a blue hue, but this starts to fade as soon as the light is removed.” 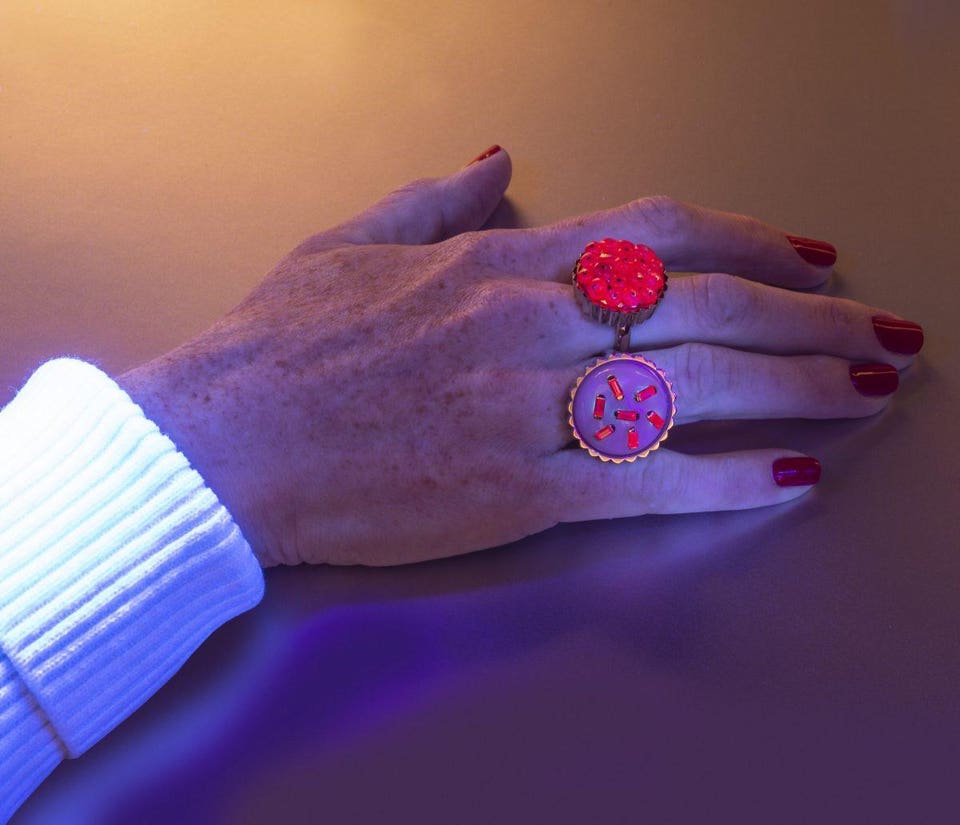 While Cora Sheibani's lusciously luminous "Berry" ring is rich in rubies, the pink opal and spinel-sprinkled "Cupcake" ring is also on exhibit at Louisa Guinness's gallery on Conduit Street until April 30, 2019.

All of the jewels appearing in Glow have been designed with consideration as to how the gemstones’ colors will appear under normal lighting, as well as when exposed to UV lighting. Like all other jewels in Sheibani’s highly luxurious oeuvre, the Glow pieces are handmade by master artisans, mostly in Switzerland, but also in France, Germany and the United Kingdom.

While diamonds are composed of carbon atoms organized in a lattice-like crystal structure, scientific research indicates that in a diamond, fluorescence is caused by the presence of nitrogen as an impurity. (When carbon atoms are absent from the lattice, these empty spaces may be filled by nitrogen atoms.) For example, a single nitrogen atom trapped near a void will cause bright orange-yellow fluorescence. Typically, however, three nitrogen atoms in lattice positions adjacent to an empty space will cause blue fluorescence. As it happens, the presence of nitrogen or other impurity atoms in the diamond crystal structure exerts zero influence on the hardness or durability of a diamond. (Good news for Sheibani's collectors.) 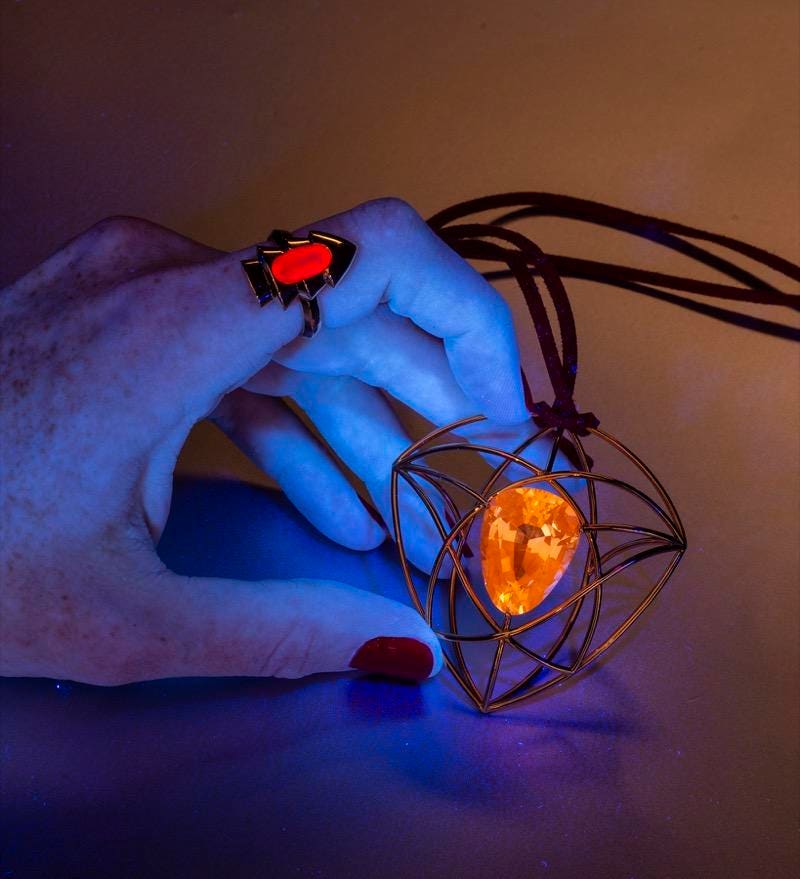 Fluorescence and phosphorescence are significant characteristics of certain gems,” Sheibani continues, “yet these qualities are often overlooked by jewelry designers.” Since she believes that, “Fluorescence in a gem deepens its beauty, power and design power,” Sheibani seized the opportunity to conceptualize and fabricate her revolutionary Glowcollection. “Fluorescence is the phenomenon of color change caused by the exposure to UV light,” Sheibani explains, “but phosphorescence in a gem means that this change remains visible for a certain time period following its exposure to UV light.”

Although many minerals fluoresce or phosphoresce, only a small number of durable gemstones show these special properties. For instance, Sheibani details, “All pink and red spinels, rubies and pink sapphires fluoresce an intense red color. A small number of yellow sapphires turn orange and only a few blue sapphires can turn red.” Brown diamonds,” she explains, “usually fluoresce white and most yellow and white diamonds fluoresce blue when exposed to UV light. Scoping out gems on Instagram, Sheibani discovered that the most intensely pink spinels from the Mansin mine in Burma are referred to as “Jedi spinel” by local dealers. Sheibani explains, “Their bright fluorescence reminds them of the glowing lightsabers wielded by Jedi warriors in the Star Wars film franchise,” she notes with an amused smile.

Along with color variations, fluorescence in diamonds varies by strength – from none, faint, medium, strong, and very strong, as described on diamond grading reports from the Gemological Institute of America https://www.gia.edu/ (GIA). The fluorescent glow and its intensity are additional characteristics that can help to describe and document a specific diamond. (According to the GIA, 65-75% of diamonds never exhibit any fluorescence.) While most diamond dealers view fluorescence as an impurity that negatively affects the gem-stone’s price, Sheibani sees it as a highly desirable factor. “I consider fluorescence to be a powerfully positive quality that when revealed, makes the gem all the more appealing and unique," she says. "Fluorescence imparts intriguing dimensions to a jewelry design.” 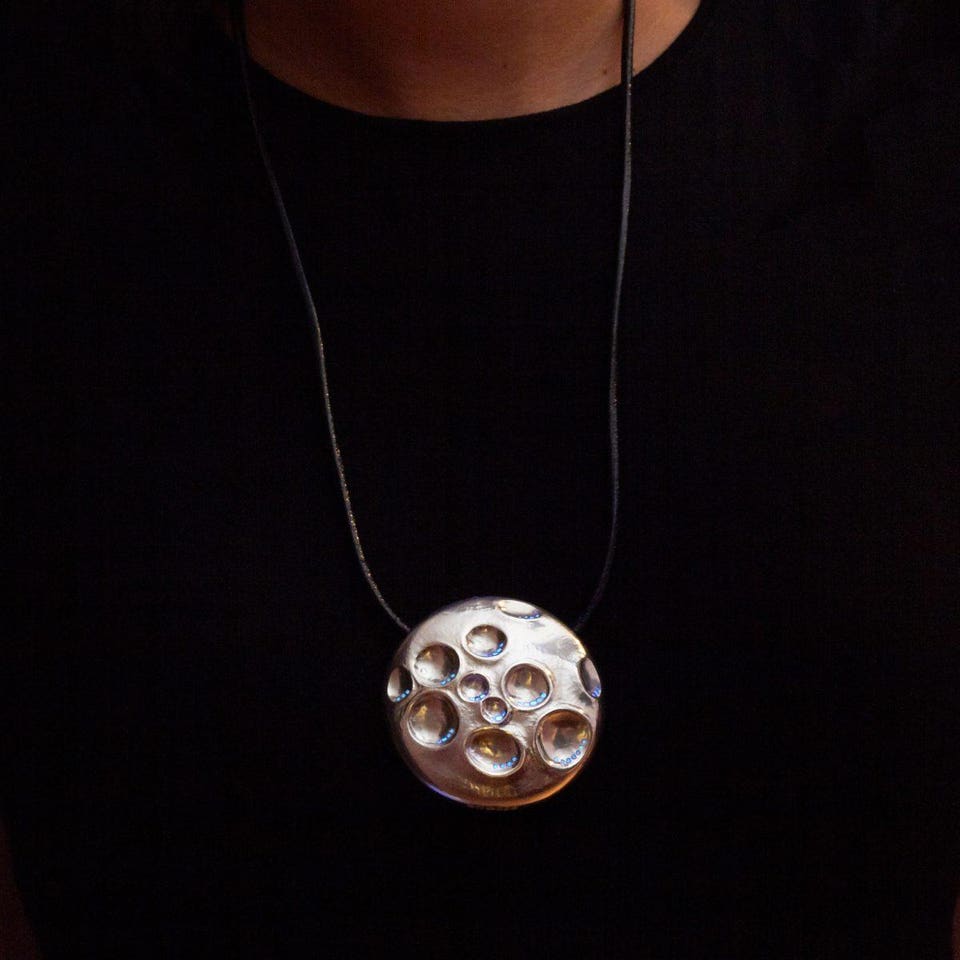 Fluorescence in diamonds is caused by the presence of nitrogen atoms. This diamond pendant glows rather like moonlight, and is one of many compellingly beautiful pieces in Sheibani's Glow collection.

To create maximum fluorescent effects in the Glow exhibition, part of Guinness’s gallery space comprises a dark-as-midnight, site-specific installation illuminated by handheld and other UV lights. In this environment, visitors enjoy the wonderful opportunity to examine each unique piece of glowing jewelry alongside vibrantly fluorescent and phosphorescent minerals that emit varying intensities of light.

Besides comprising a visually captivating concept for an upmarket jewelry collection and its gallery show, Glow is also a nomadic project. In Spring 2019, it travels across the Atlantic Ocean to New York, where it will be shown from May 16 to May 23, 2019 at the Colnaghi Gallery http://www.colnaghi.com/ at 38 East 70th Street, NY 10021. Featuring a selection of fluorescent jewels by Sheibani which are in production at the time of this writing, this brief show will also display pieces from the Louisa Guinness Gallery jewelry collection by Alexander Calder, Jeff Koons and Anish Kapoor.