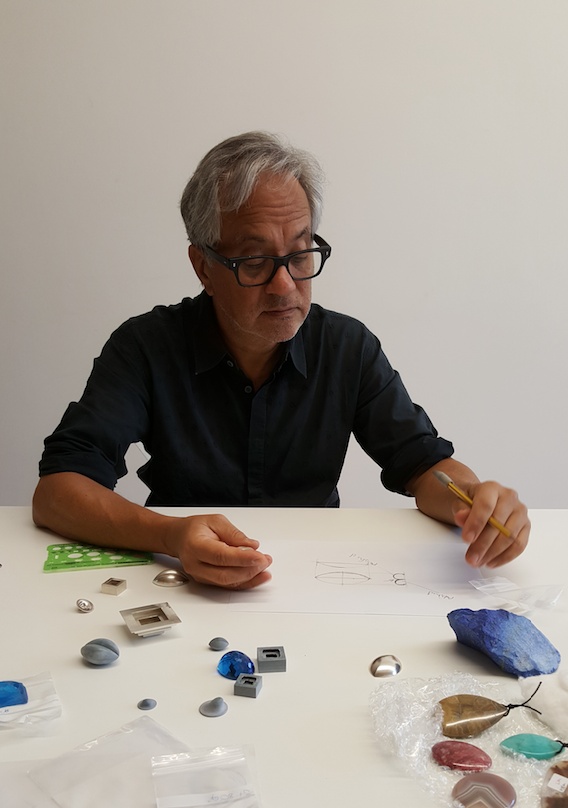 Anish Kapoor (1954) is one of the most influential sculptors of his generation. He was one of a generation of British-based sculptors who became established in the intenational arena during the 1980s. He is most famous for his public sculptures that are adventurous in form, meaning and construction. His work ranges vastly in scale from huge PVC skins, stretched or deflated; concave or convex mirrors that reflect and distort the viewer whilst incorporating them into the composition; to small pieces of jewellery; rings and pendants which mirror and evoke the overall intention and effects of his larger works. His work plays with ideas of depth and perception an in his small-scale works the effects of illusion are as powerful as in his larger works.

The relationship between man and his environment is key to Kapoor's work and has led to his collaborations on many architectural projects. For example one of his sculptures from the Sky Mirror 2001 series reflects the sky and the bustle of the Rockefeller Center in New York. Both the spectator, the environment and the sculpture itself contribute to the overall effect of the work of art.

Born in 1954 in Bombay, he has lived in London since the early 1970s. He studied at the Hornsey College of Art and at the Chelsea School of Art and Design. He represented Great Britian at the XLIV Venice Biennale in 1990 and was awarded the Premeio Duemila Prize. In 1991 he was awarded the Turner Prize and received the Unilever Commission for the Turbine Hall at the Tate Modern in London.

Over the past twenty years he has exhibited extensively with solo shows at venues including Kunsthalle Basel, Tate, Hayward Gallery, the Royal Academy in London, Reina Sofia in Madrid, CAPC in Bordeaux, Haus der Kunst in Munich and in 2010 his first major exhibition in India took place at the National Gallery of Modern Art in New Delhi and the Mehboob Film Studios in Mumbai.

He has participated in many group shows internationally including those at Whitechapel Art Gallery, Serpentine Gallery in London, Documenta IX in Kassel, Moderna Museet in Stockholm and Jeu de Paume and Centre Georges Pompidou in Paris.

Among his major permanent commissions is Cloud Gate (2004) for the Millennium Park in Chicago, Dismemberment Site I for the sculpture park The Farm, Kaipara Bay, New Zealand and Temenos in Middlesborough, unveiled in 2010, as the first of a series of large scale works for Tees Valley. Also in 2010 Kapoor was awarded the commission with Cecil Balmond for a permanent artwork for the London 2012 Olympic Park, Orbit, and in 2011 exhibited Leviathan as part of the Monumenta series at the Grand Palais organised by the French Ministry for Culture and Communication.

He was awarded Honorary Fellowships by the London Institute and Leeds University (1997), University of Wolverhampton (1999) and the Royal Institute of British Architects (2001).  He was elected Royal Academician in 1999 and in 2003 was awarded a CBE . In 2009 he acted as Guest Artistic Director of the Brighton Festival, and in 2011 was awarded the Premium Imperiale.