Aimee Farrell, FT Weekend, Financial Times, May 20, 2017
Open a larger version of the following image in a popup:

Artist jewellery is enjoying a renaissance. Aimee Farrell looks at its most captivating – and collectible – creations, from Man Ray’s mega earrings to Georges Braque’s brooches.

Fashion has long been in thrall of artist jewellery. In the 1930s, couturier Elsa Schiaparelli commissioned her circle of artist friends including Jean Cocteau and Alberto Giacometti to create experimental jewels for her collections; art world fashion plate Peggy Guggenheim boasted of being the only woman to wear the “enormous mobile earrings” conceived by kinetic artist Alexander Calder; and Yves Saint Laurent, a generous patron of the French husband-and-wife artist duo “Les Lalannes” summoned Claude Lalanne to conjure a series of bronze breast plates, akin to armour, for his dramatic autumn/winter 1969 show.

So when Maria Grazia Chiuri enlisted Lalanne, now in her nineties, to devise the sculptural copper jewels for her botanical-themed Christian Dior Couture debut this year, she put artist jewellery firmly back on the agenda. “The fashion world is finally waking up to artist’s jewellery again,” says the London gallerist Louisa Guinness, a champion of the genre who deals in jewels by painters and sculptors both old and new. One of a handful of gallerists, including Elisabetta Cipriani and Didier specialising in artist jewellery, Guinness is doing a book on the subject, titled Art as Jewellery, due out this year. She recently loaned pieces from her vast collection to accessorise the Victoria Beckham AW17 catwalk show. “Fashion designers are always looking for something original and different, and art jewels are utterly unique,” says Guinness, who set up her eponymous gallery in 2002. “It’s exciting.” 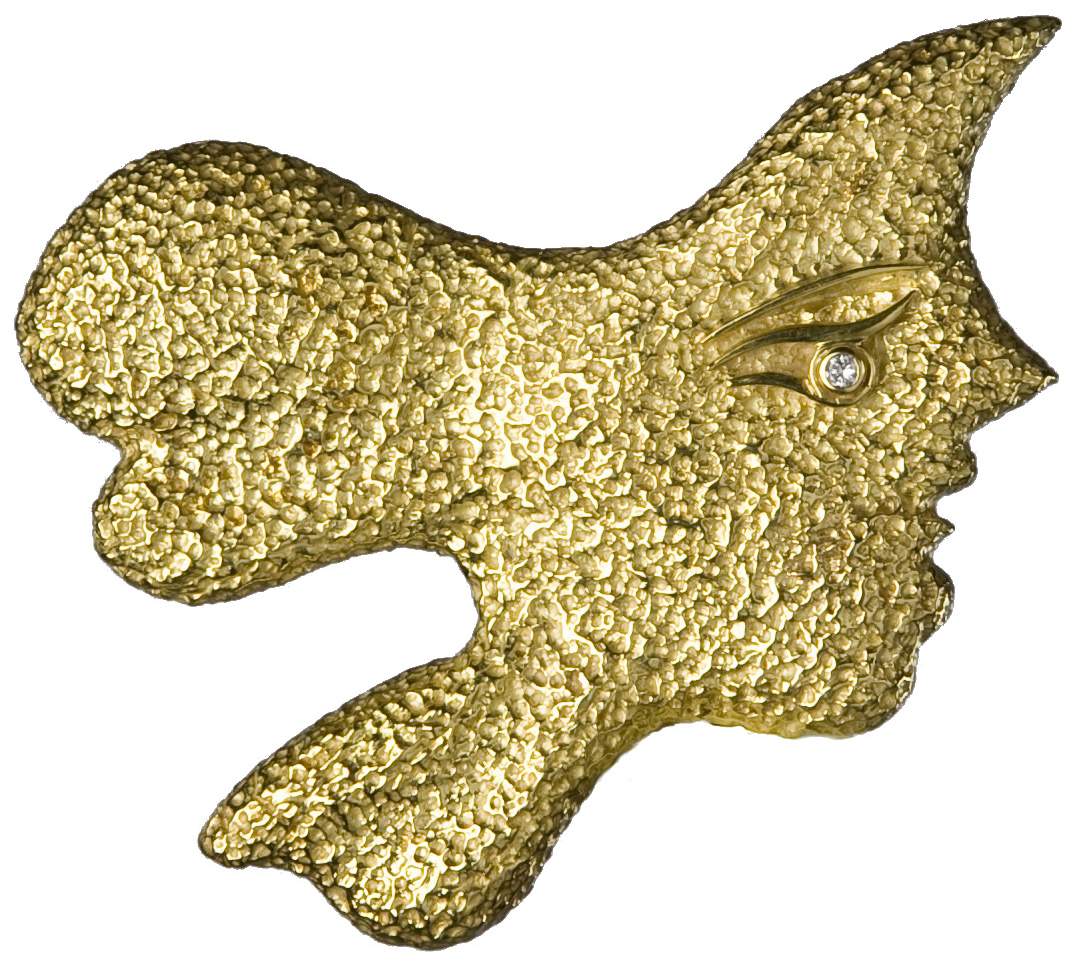 But why has artist jewellery been overlooked for so long? The simple fact is that many people have no idea that artists as varied as Picasso, Man Ray and Max Ernst ever made jewels. Created sporadically, often in small batches, their works are incredibly rare. But with more art fairs and shows than ever, the pool of collectors is gradually growing – and with it the prices. A few years ago, a brooch by Salvador Dali, “The Eye of Time” sold in London for around £75k, before being re-auctioned months later in Manhattan for approaching £1m.

Yet, strange as it sounds, part of the jewellery’s appeal remains its relative affordability: “Not many people have £100m to spend on a Picasso painting, but you can get a masterpiece of his artistry in jewellery for a fraction of the price,” explains Andres White Correal, Sotheby’s senior director of international business development jewellery, a more profitable division than contemporary art for the first time in 2016. “It’s taken an enormous amount of time to convince people of its intrinsic value,” he says. “Buyers usually want to know how many carats the stone is, or how precious the materials are. But the more other prices rise, the more art jewels become a viable means to step into collecting.”

For Guinness, who counts Ed Ruscha, Anish Kapoor and Gavin Turk among the contemporary artists whom she has persuaded to create jewels, these works have a value that goes beyond investment potential: “Artists are more interested in the conceptual idea and the form of a piece than simply creating beautiful jewellery,” she says, pointing to Calder, who made more than 2,200 jewels, fashioned from copper wire, pieces of broken glass and even cutlery. “Artist jewellery is about experimentation,” she says. Guinness also recommends the artful display of these wearable sculptures: “If you can hang a Picasso canvas on your wall then why not a necklace?” 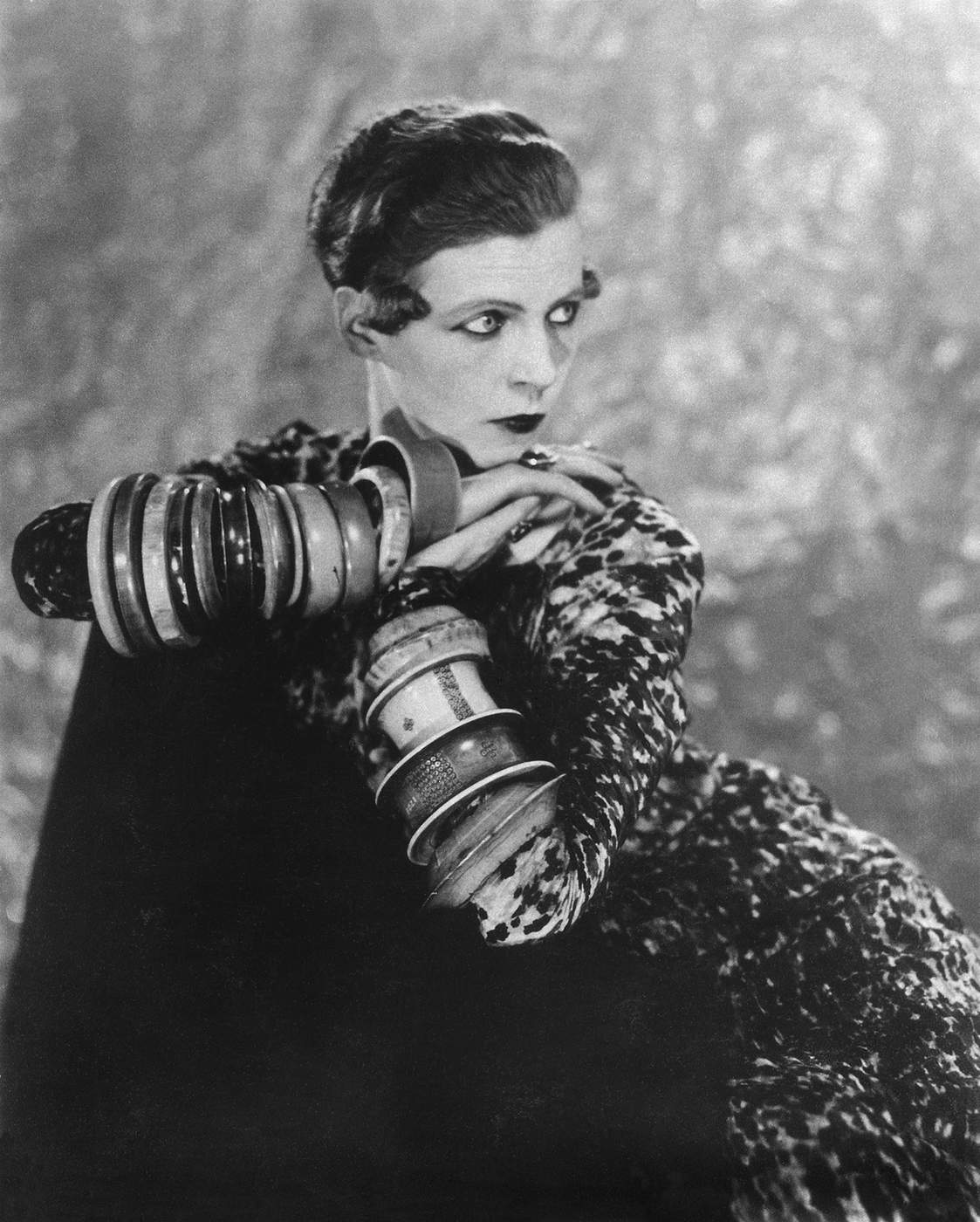 A brooch portraying Lee Miller’s lips, rings complete with tiny tunnels that offer an alternative perspective on the world and 24 carat gold sunglasses – it’s no surprise that the avant-garde artist Man Ray’s forays into jewellery were short on practicality but big on invention. “Man Ray exemplifies that great joy of artist’s jewellery: storytelling,” says Guinness. It was a love of cars that lead to the creation of his Optic-Topic mask, wrought in gold it was designed to protect his eyes before the advent of the windscreen. While his gargantuan Pendantif-Pendant earrings drew from the spiralling form of a lampshade he’d created in 1919. Designed to loop over the ear, the screen beauty Catherine Deneuve wore them best when she sat for one of the final portraits taken in the artist’s rue Férou studio. 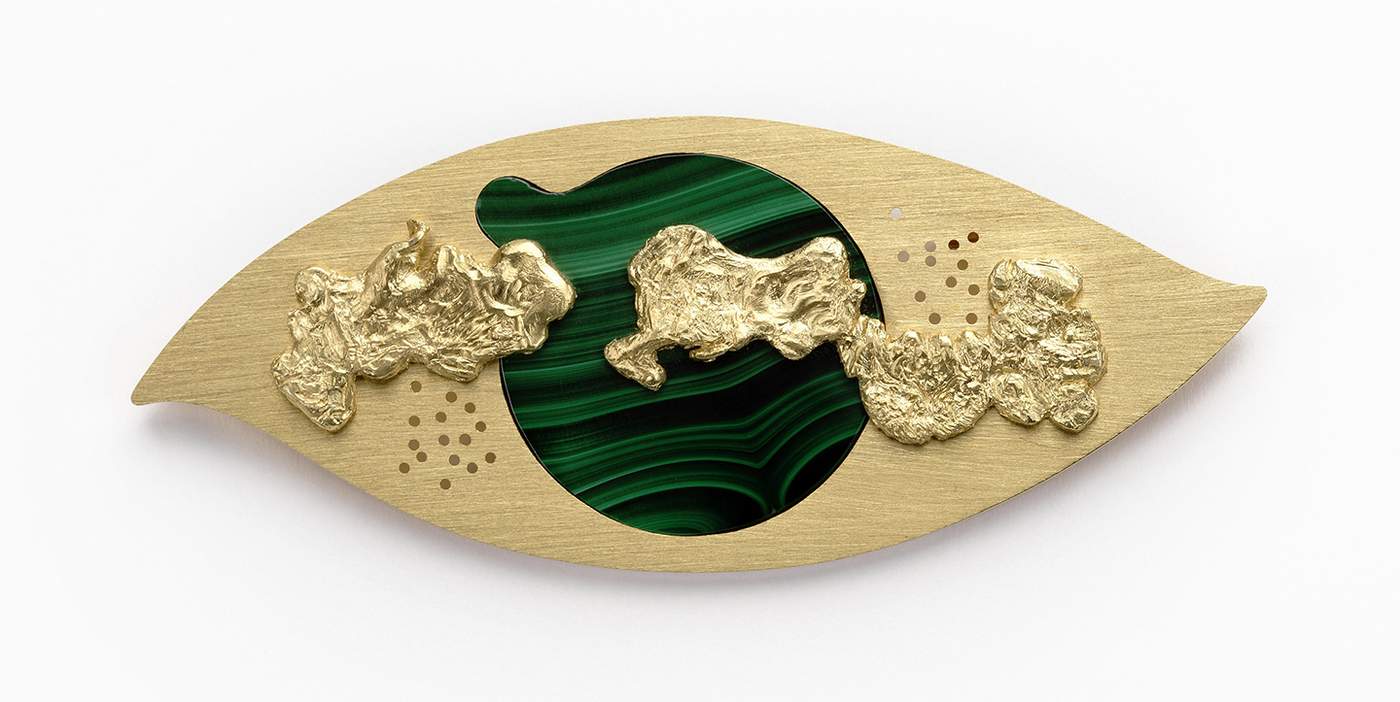 Man Ray ‘The Oculist, 1971’ brooch in 18 carat gold and machelite. Courtesy of the Louisa Guinness Gallery 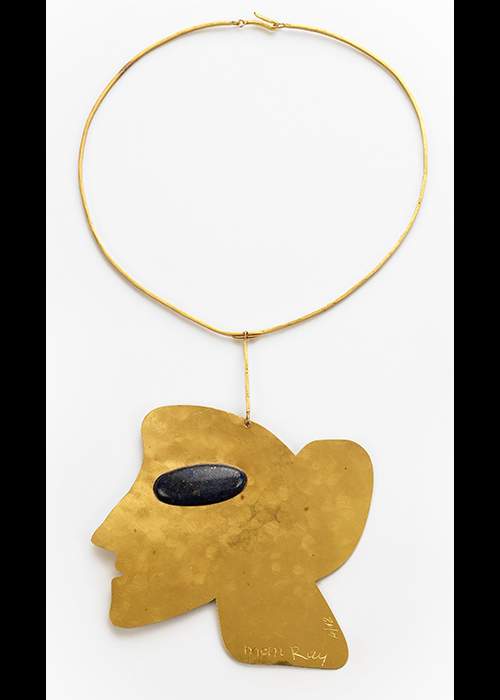 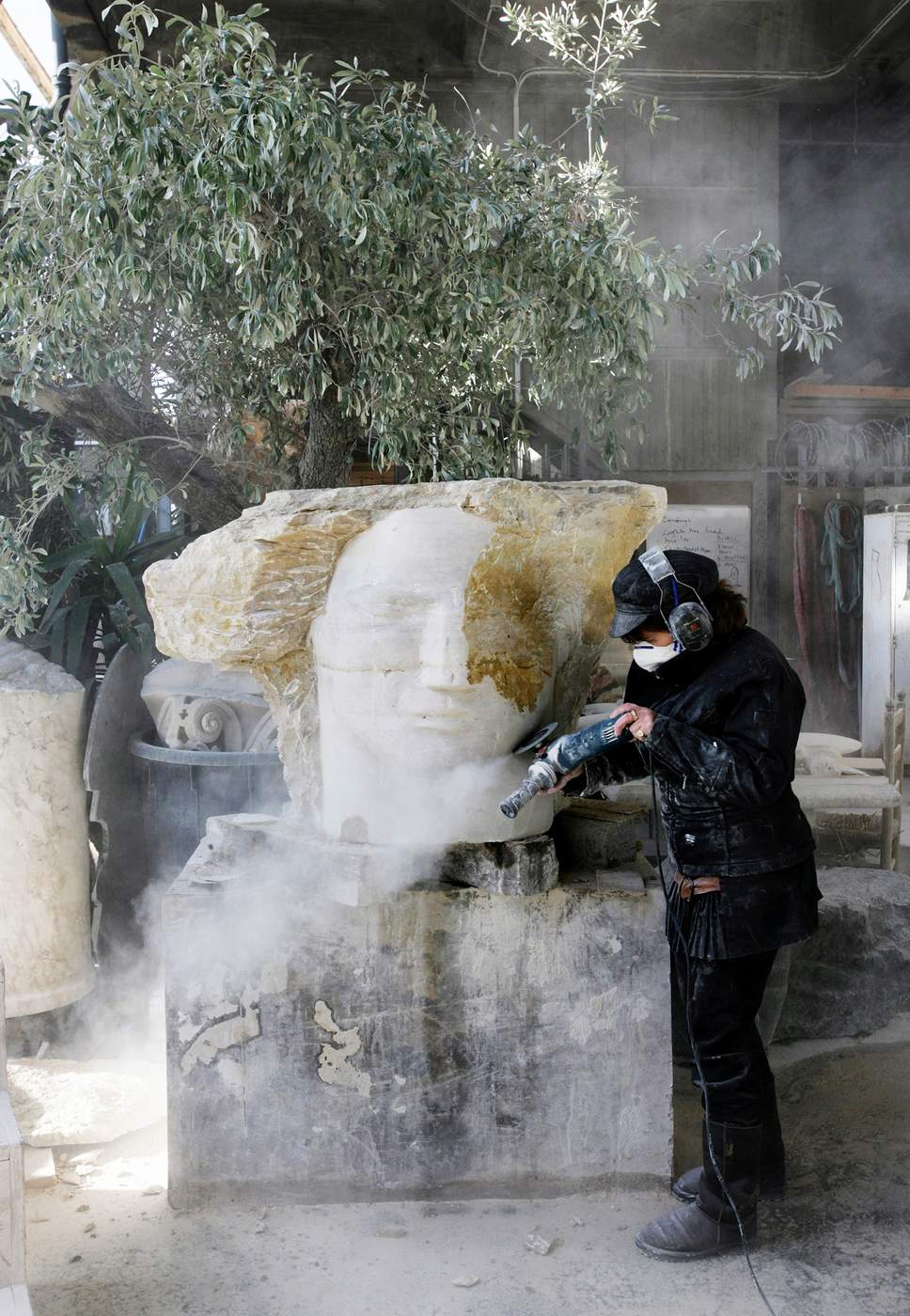 London-born natural stone sculptor Emily Young is new to the jewellery-making game. Typically carving human forms into monumental slabs of onyx, alabaster or marble which she sources from Italian quarries (she lives in a converted monastery in the Tuscan hills), her jewels, though comparatively minuscule, pack minimalistic punch. Victoria Beckham picked out a pair of Young’s understated designs to adorn pieces in her AW17 catwalk show, cleverly stringing the lapis lazuli and chrysomelanite brooches to blazer lapels. “Victoria likes the earthiness of Young’s work in natural stone,” explains Guinness who loaned Beckham the jewels, and is currently liaising with the designer on future collaborations. “It’s about being understated – not bling.” 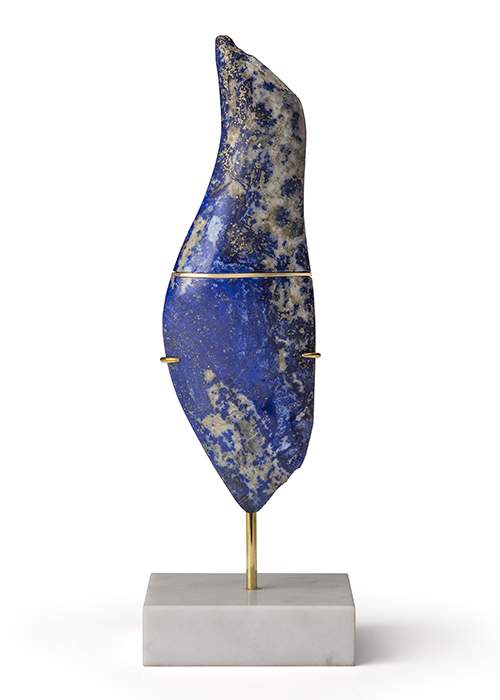 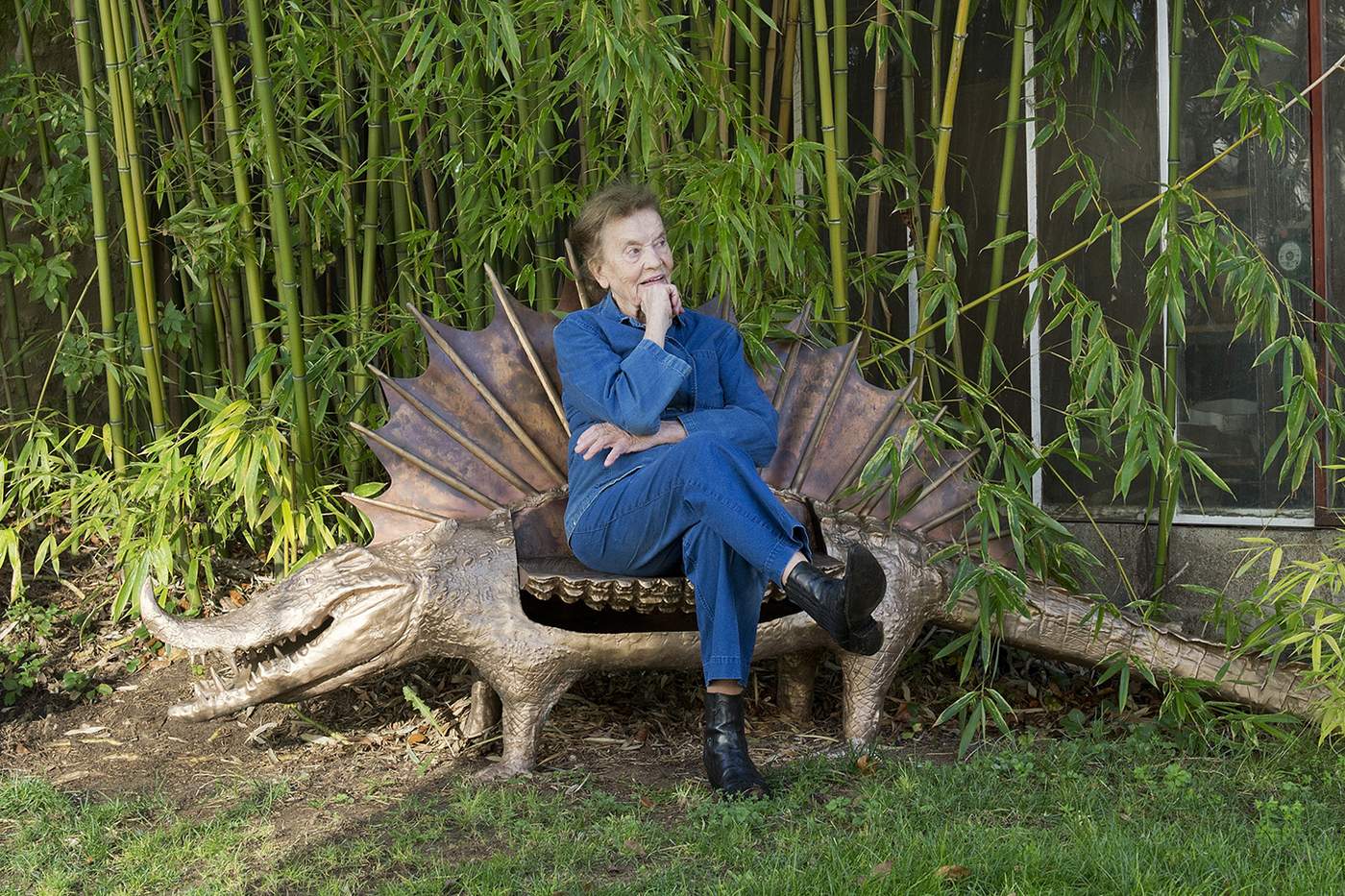 Revered French artist Claude Lalanne began making jewellery as presents for friends in the 1960s. Now 92, she is one of the most prolific living artist jewellers. “In comparison to sculpture, making jewellery is a very delicate process,” explains Lalanne, who draws inspiration for her organic designs from the garden of her home in northern France. “I like to make works that feel alive.” Her creative process is not without hazards though. “Even now my hands are scarred with burns from my blowtorch,” says the artist who finally galvanises the metal to lend it its signature rose tinted hue. This year Lalanne’s sculptural blossoms, brambles and her beloved butterflies adorned models wrists and waists at the Spring 2017 Dior Couture show. 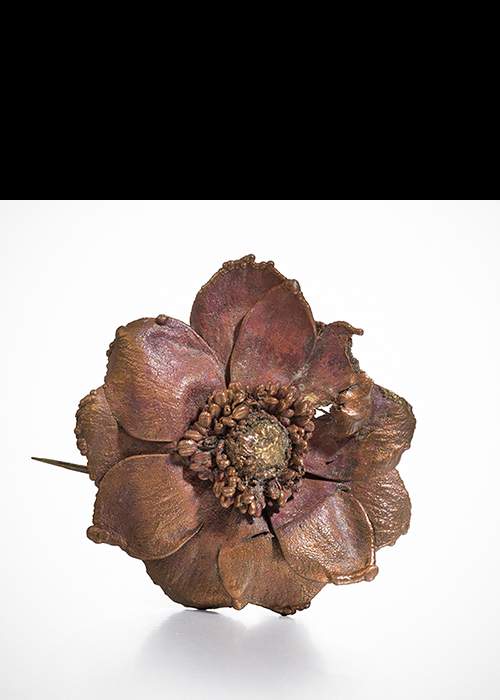 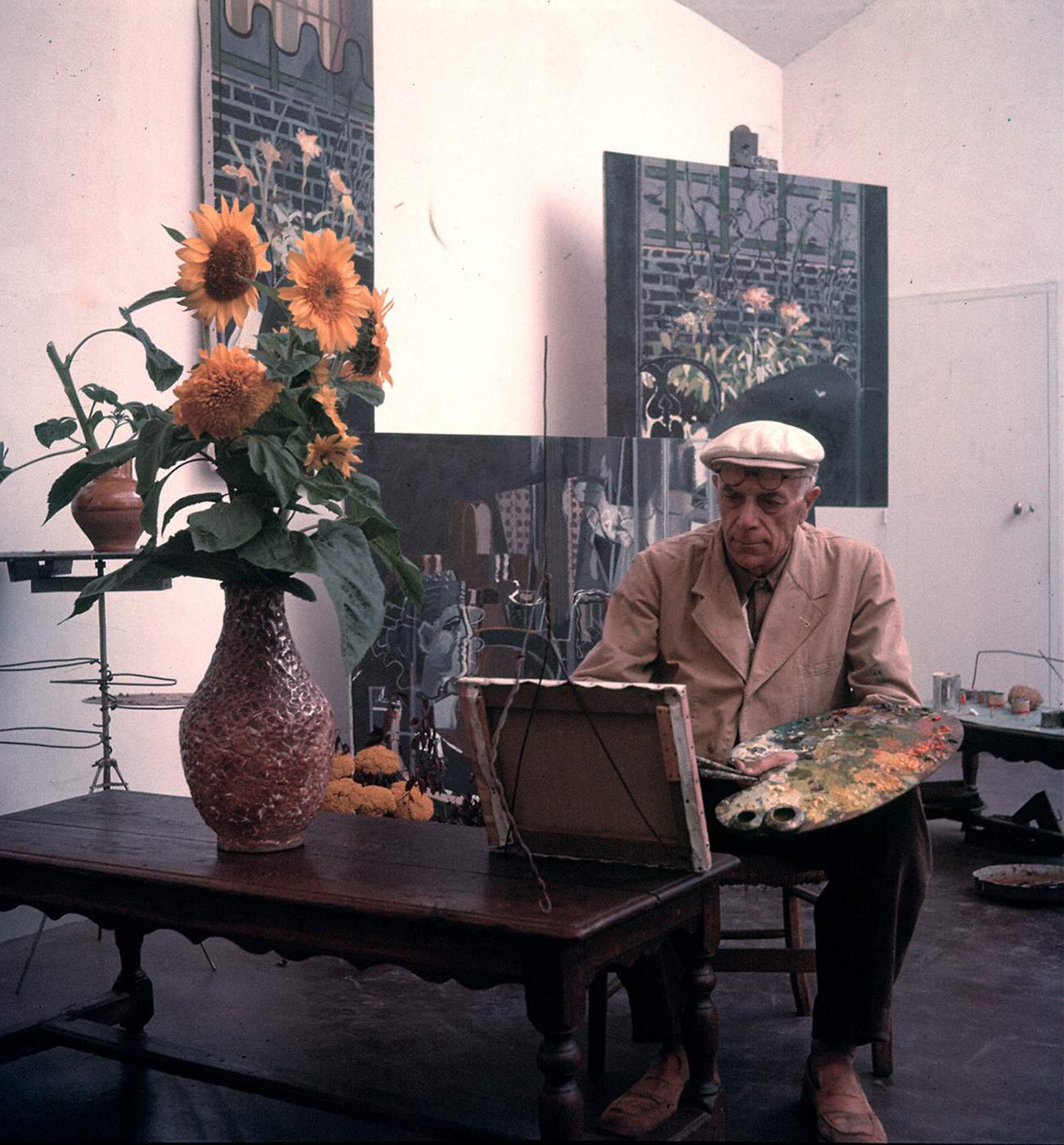 In 1961, towards the end of his life, the celebrated Cubist painter Georges Braque began designing his first collection of one-off jewels. Working with the place Vendôme sculptor, jeweller and lapidary Héger de Löwenfeld, theirs was a sublime meeting of creative minds: together they conceived sculptures, tapestries, ceramics and exquisite jewels. Braque called his collaborator, “the extension of my hands”. Their totemic creations borrowed from the French artist’s rich iconography, and culminated with a wildly successful Paris exhibition, One Hundred Works By Georges Braque, which opened just three months before the artist’s death in 1963. There are brooches embellished with Tahitian pearls, cameos fashioned from gouaches bearing portraits of Persephone, and a veritable flock of diamond-clad birds in flight, an especially poignant recurring motif that can also be found painted on the ceiling of the Salle Henri II in the Louvre. It was a protracted process: it took de Löwenfeld nine months to transform Braque’s “Greek Head” gouache into the sardonyx jewel of the Circé ring. Yours in ceramic sculptural form for €25k. 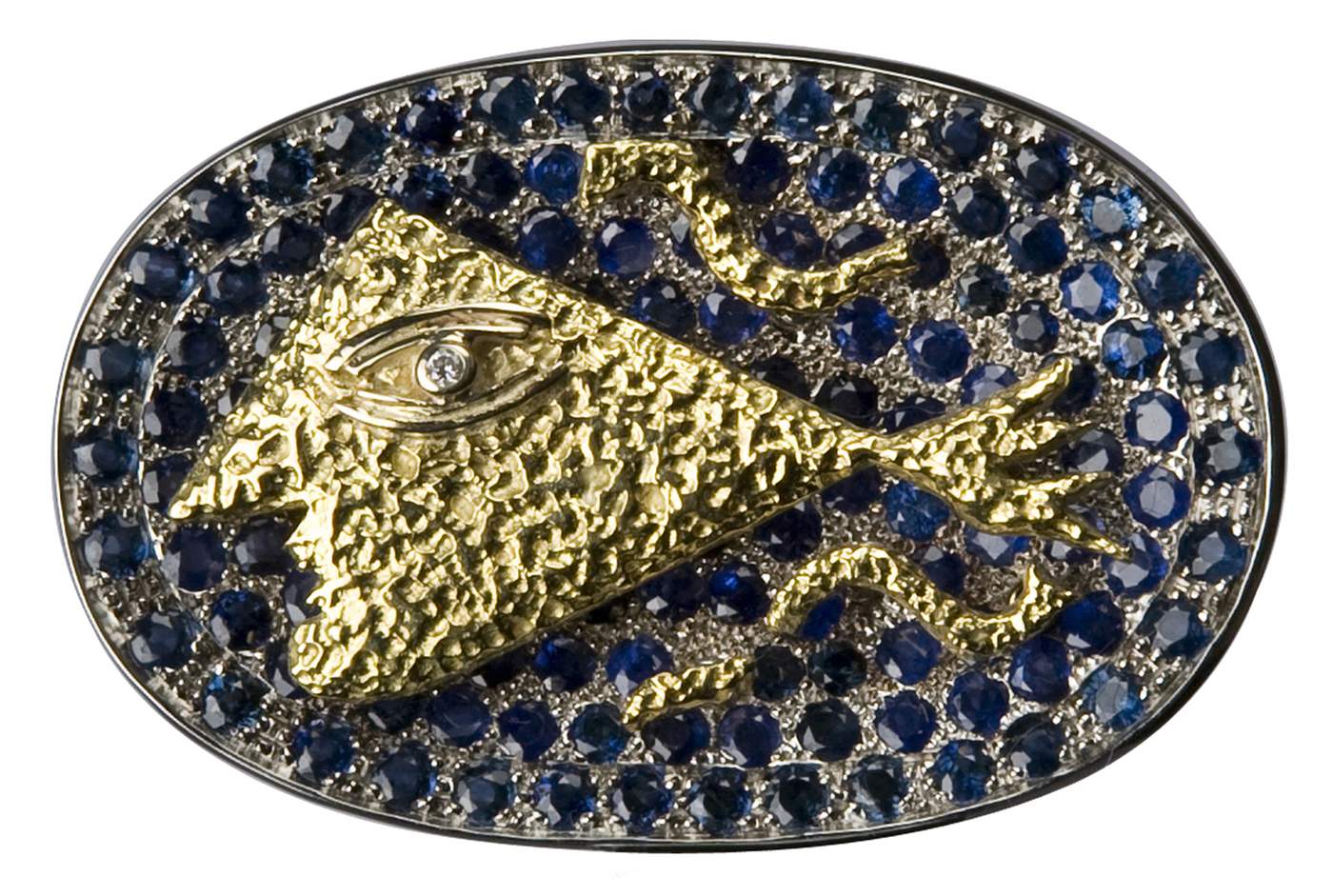 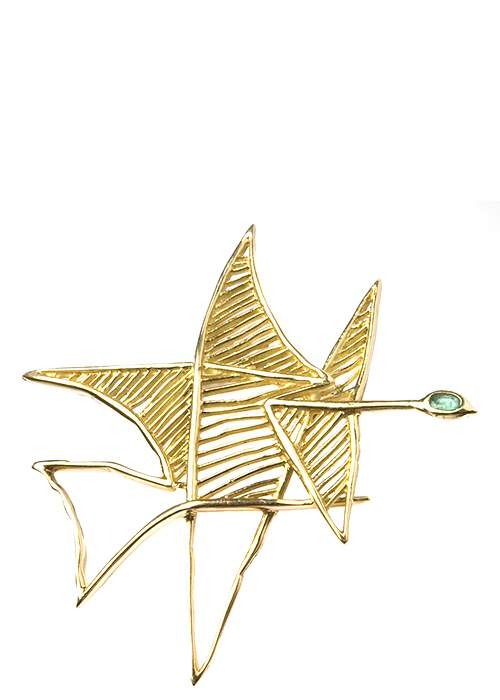 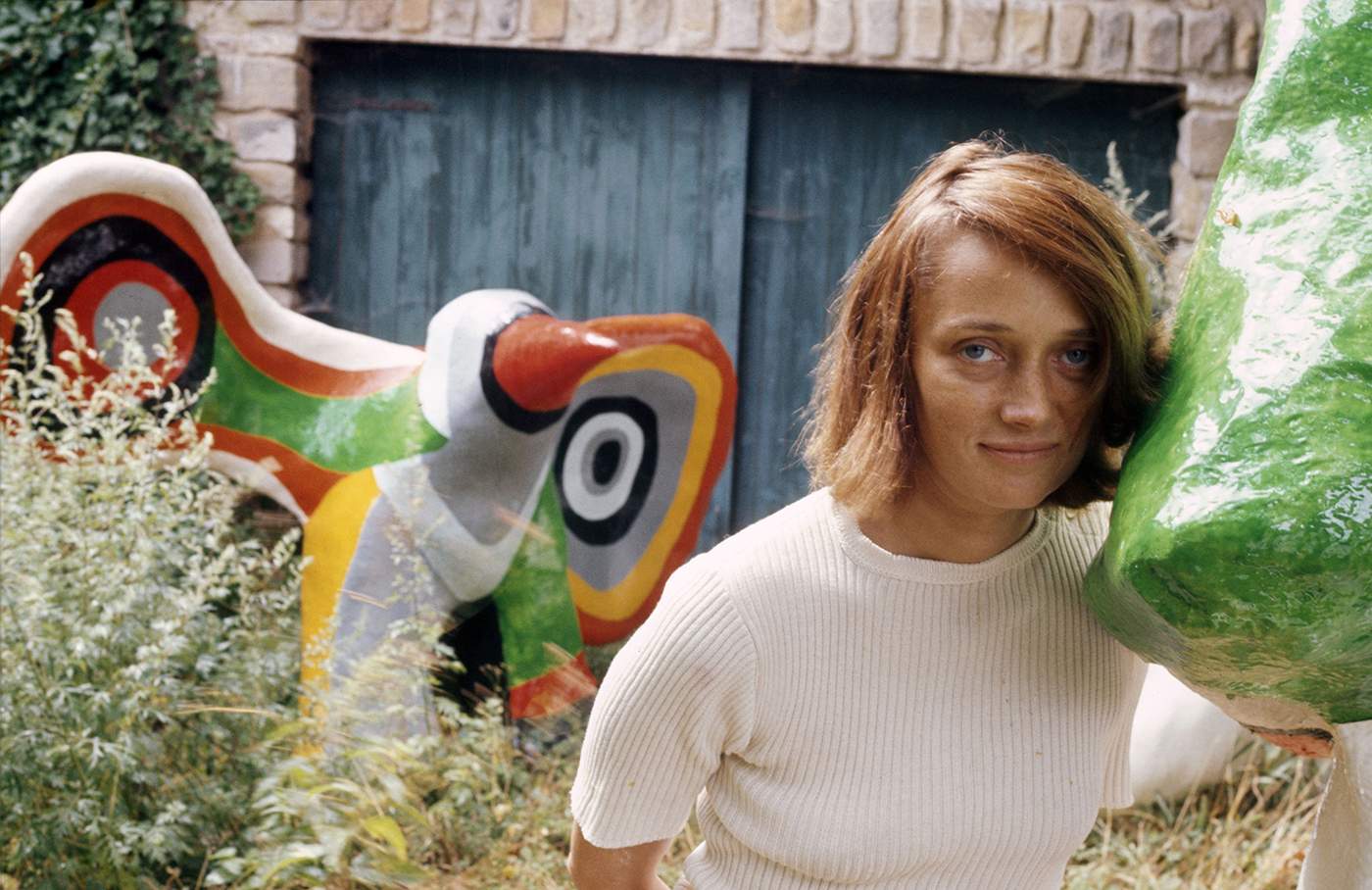 Niki de Saint Phalle was a fascinating figure. The French-American artist, feminist and sometime model, who was photographed for Vogue by Horst P Horst in the 1950s, was also an occasional artist jeweller. Best known for the army of Rubenesque sculptural figures that she called “Nanas” (French slang for women), de Saint Phalle refashioned these bright, big-bosomed creatures into a fantastical series of jewels during the 1970s. The artist – who was a muse for Julie de Libran’s recent rainbow bright AW17 Sonia Rykiel show – would sketch her surrealist configurations of hearts and hands, serpents and dynamic dancing Nanas in pen, pencil and collage on paper. It was down to the skilled artisans of Gem Montebello (the Italian workshop which produced jewellery by a number of artists including Sonia Delaunay, Man Ray and Hans Richter) to realise her visions; a notoriously tricky feat that often took many months. 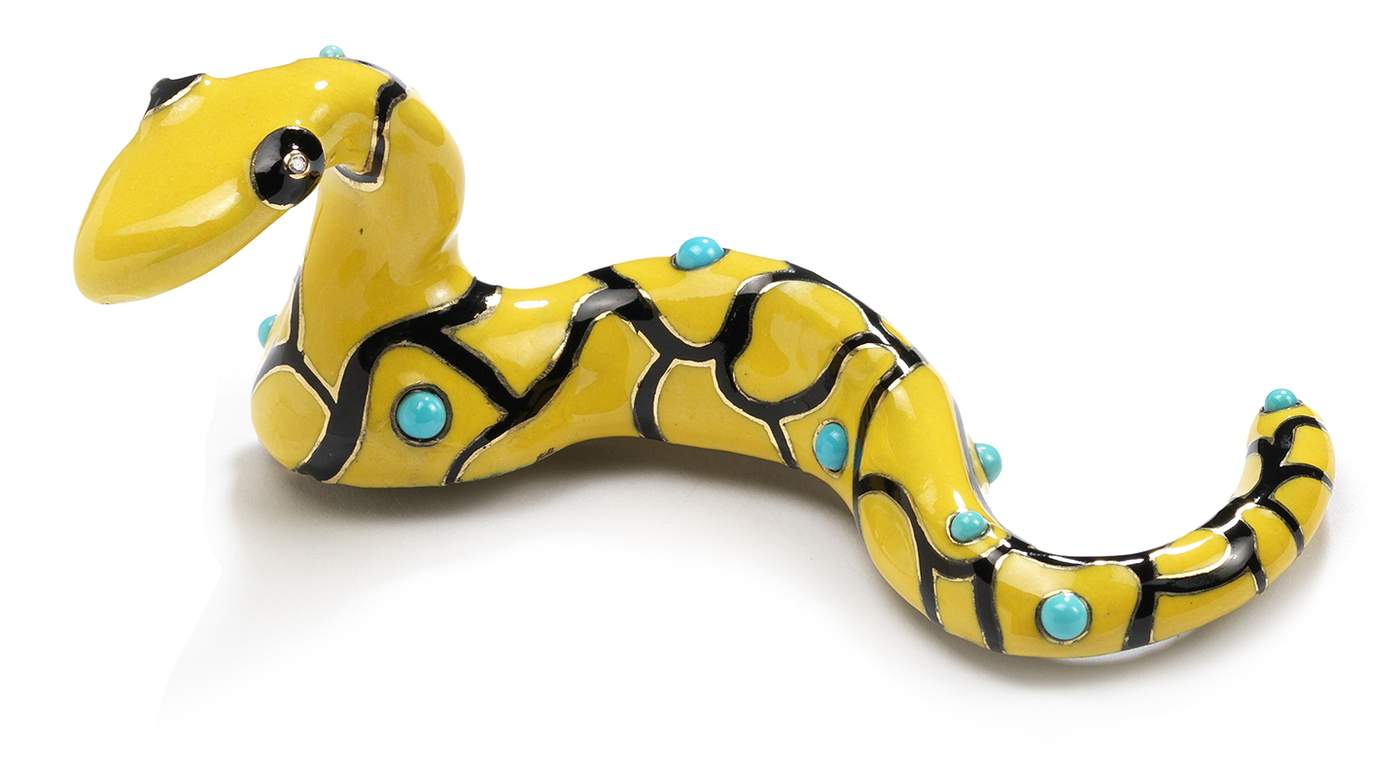 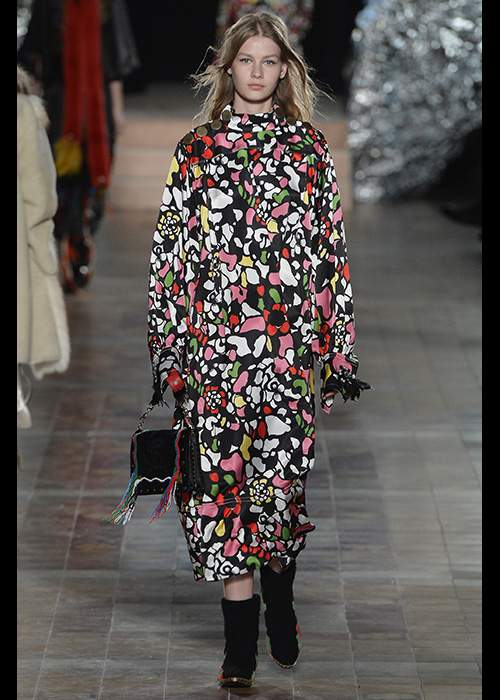